I woke up in another monotonous morning, same as all the other days. I had very little amount of food for breakfast, as the provisions were becoming scarce. Then I read a book I stole from a sailor for introducing myself in the sea voyage, but it only makes me feel more afraid. The book talks about the beasts of the ocean, and how strong they are. After reading, I  stayed in my room, reading and finding more about being a doctor,  which was my commitment in the ship and also my cover. Then, I had a little lunch and walked around the ship. As I told, every day was equal to the day before, as it was my sickness. Since we started this trip, it hadn’t  stopped. As a doctor, I should tell it is normal, just because it was my first time, but there was something else. I wanted to get off to arrive to my destiny as soon as possible, because I was afraid of being discovered. The consequences could be terrible.

Somehow, a week later we went ashore. I was so happy I was finally going to escape from my problems… But then I found about the truth. As we got nearer the land, it started looking more like an island. I asked  the captain where were we approaching and if we were going to stay there for a long time. Those islands were the canary islands, and yes, we had to stay because our rudder was broken. Now all my plans were ruined. All my hope was gone. What have I done? I didn’t disserve this! I needed to make up my mind, and this month was the perfect chance to do it.

The next week I worked very hard. I continued my doctor studies just in case I didn’t change my job in the ship. I also learned some Italian, but not enough for talking with the Italian sailors. I read the Bible many times, maybe god pities from me even if  I had lied to a lord like the captain. I made a list with the things I had to do to survive. These are some: Don’t speak with Italians, don’t let the other doctor enter to the ship where I am, make friends in the ship. With my list, I figured I needed to change my job. One day, while I was entering provisions to the bridge, I saw all the sailors doing really strange things, they were in their pray time. They did all the priest told them just for “gods sake”. That’s it! If I change into a priest, then no one could do anything to me because I would use “god’s faith” on my own purpose. But I needed to know at least the basic things from our religion to make it more realistic, so during our stay in the Canary Islands I stayed with the priest.

Every day, after I entered provisions to the ship I went with the priests, and the one belonging to my ship, Alberto Mendoza, became a good friend of mine. There were priests in all the ships, and if I wanted to become one I needed to quit at least one of them, the perfect way was humiliation. The month quickly passed and I was now prepared to be a priest.

It was my last day on those islands, in fact it was in the afternoon when I realised I hadn’t changed my cover, and I hadn’t humiliate any of the priests yet. The first two ships had already left. If I really wanted to be the priest of my previous ship I needed to humiliate my best friend, and I needed to do it quick. 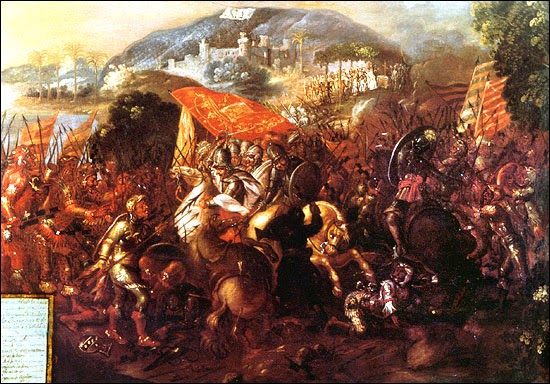 16th March
The battle finally took place the 14th of March. It was, without any doubt, the worst experience of my life. I didn't know how to fight and I was really afraid. S
o, in the middle of the battle, with some small injuries, I ran and hid between some trees, until we finally defeated the Maya-Chontales.

24th of March
Today, we have founded the city of Santa María the Victoria in the place of the battle. It is the first city of the 'New Spain' in America.

The problems have appeared. Between the natives that work the lands, an epidemic of smallpox has appeared, killing lot of them while, between the spanish people, the disease doesn't elimate anyone. That's not the only problem. Some soldiers have developed the malaria. Our priests are praying for trying to make dissapear all our problems.

17th April
The problems haven`t dissapeared but our captain has decided to continue our voyage through the dense jungle. Sixty soldiers have stayed in the city for trying to pacify the region.

We have taked course to the city of Cucúa. Our captain wants to discover the great secrets and riches of this great empire. I think we should plan better our next offensive, but the captain is who commands.
Publicado por Unknown en 2:38 No hay comentarios:

Now when we are getting back to Spain, I want to describe the main affections that we have suffered in the voyage. Some sailors have suffered diarrhoea, possibly caused by the food. Some of them nearly died because of the lose of water, but finally I could cure all of them. Other men had scurby too. It is a very frequent illness among the sailors, when they don't consume fresh food, such as fruit and vegetables.

November 12th 1492.
During the voyage the captain Colon suffered blepharitis, maybe caused by the effort to watch land from the caravel for many days. Now that we are going back home, some men present fever and breathing troubles. This is an illness that I saw very few times, called influenza.

November 13th 1492.
The relations with the Indian people have allowed me to know some diseases usual among them, that we had never seen before. I have written the symptoms I observed and I am going to prepare an exposition to talk about them with other doctors and try to look for possible solutions for them. For me it has been a very interesting experience.
Publicado por Unknown en 1:03 No hay comentarios: 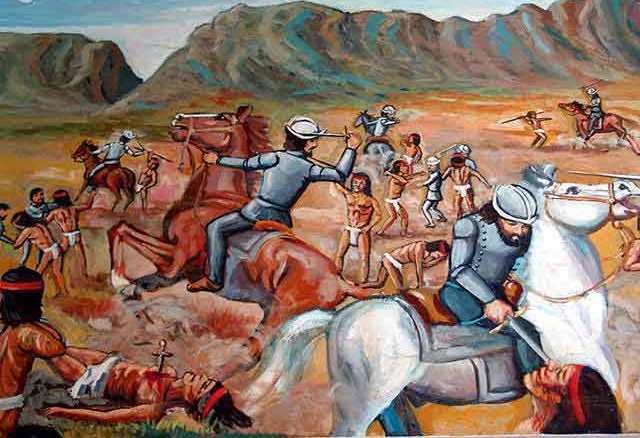 The last month has been really hard for all of us. We have had problem with the lack of food. Finally, Cortés had decided to go ashore.

When we took land, some days ago, we camp near a city called Potochán.  I don't know why but we are preparing for a battle. Pedro de Alvarado, my close friend, explained me that the idea of Cortés is to rescue some spanish soldiers. I can't understand correctly whats it's happening here. I think there is something more behind this decission. This natives are really friendly.


Anyway, the last week I have talked to many soldiers and sailors about the disease, but I didn´t find anything useful, only the things I just know. However, I notice that the natives of this land are getting sick with the smallpox and dying faster than the spanish people. I will investigate this events, but now I must prepare myself for healing war bounded. I hope I don't die in this crazy adventure.
Publicado por Unknown en 0:23 No hay comentarios:

The "volta do mar" hasn't finished and we haven't arrived at the south of Africa. "The volta do mar" has taken more time that we thought and we have eaten all the foodstuff we had in the hold. However,that's only one of the problems.
This night, I am going into a meeting because the sailors aren´t happy with the capitan and the lack of food. I think that they are planning to take the control of the caravel and I don´t know what to do. I´m a honorable man and I gave my word to the captain, but... I don won´t to die and I am thinking about sending an anonimous message to the Admiral or the Captain. I'm sure there is going to be a rebelion soon and I don´t want to be in the lossers place because that means death.
In addition to this,  I like the capitan position an behaviour. He is doing really well, he is always worried about the crew's spirit.  If I alert him he will be able to control the situation and avoid the rebelion and the death of the sailors by the gibbet.
Juan Domingo veteran sailor at  Captain Hernando Castello's service in life or death

One more day all seems wrong. My crew and I are worried about the end of this expedition, nobody knows what is going to happen and we are having some problems with this journey. It is lasting to much and for several weeks we haven't seen any land.
I'm starting to think we are lost in the middle of the sea. But that's not all, in the storage the food is dissapearing, we haven got  food for  only two more weeks. Everyone is hungry and nervous, we must take a decission. Colombus has given us some explanations about this expedition but my crew and I don't believe them. We have thought a lot about what can we do in this situation.
After days searching for ideas, we are agree in comming back home. It's hard but is the only solution. I have to give the ultimatum to Colombus, I'm afraid of the things that could happen after this, however if we don't come back now we will die. If we don't see land in 3 days we will return home.
Captain Lope de la Puebla
Publicado por Unknown en 4:17 No hay comentarios: